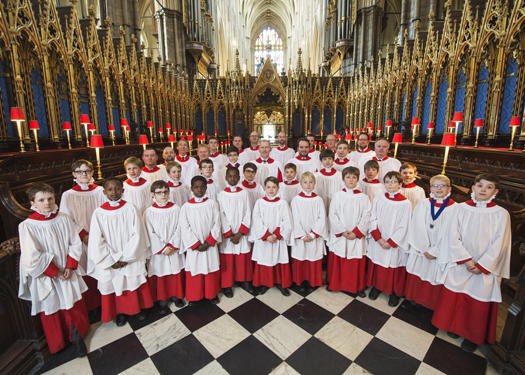 James O’Donnell, Master of the Choristers and Organist

Westminster Abbey, founded by Edward the Confessor, was consecrated on December 28, 1065.  The setting for every Coronation since that of William the Conqueror in 1066, the building was mostly completed between the 13th and 16th centuries.  While the Abbey is renowned for its Coronations and other Royal occasions, continuous daily worship has been offered for over nine hundred years.

It is not known when boys first sang in the Choir, but the first mention of an official Choirmaster comes in 1479 with the appointment of William Cornyshe as “Master of the Song Scole.”  In 1540, Henry VIII set forth a charter providing for twelve laymen singers and ten choristers.  Today, Westminster Abbey Choir School is composed entirely of the thirty-six boys who are singing or are being prepared to sing in the Abbey Choir.  Apart from the ten full Choristers (the number has been retained since the charter of the 16th century) there are twenty singing boys and generally six probationers.  They lead a full life, singing at Evensong six days a week as well as at three services on Sunday.  Each day begins with a practice of an hour, followed by normal school lessons; in the afternoon, Evensong is preceded by a practice with the Lay Vicars (adult singers).  The boys must fit in individual music lessons – most learn two instruments – and the schedule also includes football, cricket and swimming.  Prospective choristers are auditioned around the age of eight, and boys stay in the choir until they approach their fourteenth birthday, when they go on to their next school.

All of the Lay Vicars are professional singers with a great wealth of experience; some were choristers in their youth.  A number are experts in early music and are fine soloists in their own right. Some of England’s greatest choral composers have been Abbey organists. The most renowned period was during the 17th century, which included Orlando Gibbons, John Blow and Henry Purcell.  In the last fifty years, the Abbey Choir has produced several important composers and singers from its ranks, including former Director of Music at King’s College, Cambridge, Sir David Willcocks.

The Choir of Westminster Abbey has performed for Evening Prayer in the presence of Pope Benedict XVI in 2010, for the wedding of the Duke and Duchess of Cambridge in 2011, and in 2012 they were invited by the Pope to sing alongside the Sistine Chapel Choir.  Recent concert tours have included Sydney, Hong Kong, Washington DC, Moscow, and the BBC Proms in London; their recording Mary and Elizabeth at Westminster Abbey received the Gramophone Critics’ Choice Award and has been hailed as “a showcase for English choral singing at its most charismatic.”

MINNEAPOLIS “… unshakable discipline, beauty and fullness of tone, and the ability to capture the nuances of varies styles of music.  The audience could not get enough …”
Saint Paul Pioneer Press

“This is cathedral choral singing at its finest and most inspiring.”
Daily Telegraph

“… one of the great choral powerhouses of our time.”
Sydney Morning Herald

“The men and boys of Westminster, under the sensitive baton of James O’Donnell, possess a beautiful sound, with a remarkably even blend and unanimity in phrasing.”
Washington Post