Known for a mature, deeply expressive and communicative musicality, David Baskeyfield is the winner of an unusually large number of international competitions both in interpretation and improvisation, all with audience prize. He performs extensively in Great Britain and Europe, has appeared at major organ festivals in the US and Canada, and is frequently featured on the NPR radio program Pipedreams. He is one of relatively few artists based in North America to improvise regularly in recital. His two commercial recordings to date, both showcasing instruments of particular significance, have been received to high acclaim.

MONTREAL – “Baskeyfield shaped the Cantabile [of Widor’s Organ Symphony No. 6] fluidly and marshaled the mighty first movement to a truly symphonic conclusion.  This 31-year-old Englishman plays with clarity and rhythmic verve.”
Montreal Gazette

PLANO, TX — “It’s hard to imagine a more commanding performance of the Final from [Louis Vierne’s] Sixth Symphony.  Baskeyfield’s feet flew flawlessly up and down the pedalboard in one of the trickiest pedal parts in the organ repertory.”
Dallas News 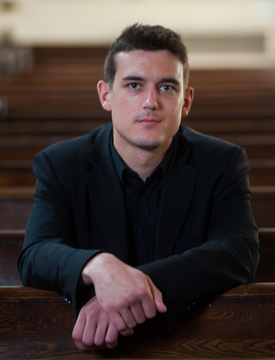