“If Christian Lane is an example of the future of our instrument, not only will he bring new converts to it, but the panache, vitality and joy with which he plays may just show people how musical the instrument truly is capable of being! Bravo!!”
Organ Canada, September 2012

“Christian Lane, a student of Thomas Murray, found registration similar to that of his teacher, and right off at the beginning of the recital, an array of principals and reeds filled the small space … Lane displayed the purity of the Skinner flutes in the fugue from the [Bach] Toccata, Adagio, and Fugue in C Major … He had more than a workout in the toccata creating calls and responses with quick, frequent … changes in registration.”
The Boston Musical Intelligencer, February 2011

“Lane’s registration was so clear and brilliant, as was his handling of the rhythmic and structural challenges of [the Litaize Prelude et Danse Fuguée], that it sounded as though it had been written especially for the Harvard organ.  John Knowles Paine’s Variations on ‘The Star Spangled Banner’ … turned out to be a stirring and appropriate close to [the] program … In the splendid hands of Christian Lane … any instrument promises to sound glorious.”
The Boston Musical Intelligencer, May 2010

“Lane … played the keys with demonstrative flourish, and his feet glided over the pedals like a dancer … the final variation [of John Knowles Paine’s Concert Variations on ‘The Star Spangled Banner,’ Op. 4] was grand, full, and uplifting … After the final lingering note … there was a two-minute standing ovation.”
Harvard Gazette, May 2010 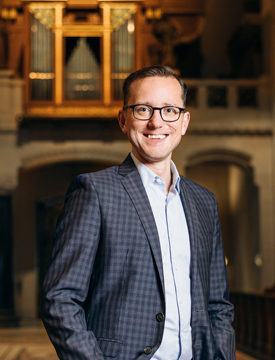